On Tuesday, August 7, 2012 NYC craft beer enthusiasts gathered at Rattle n Hum, a well known craft beer bar to get a chance to taste some of the most sought after beers from Founders Brewing Company. Of all the beers on tap for the event; the two beers that most of them came for were Canadian Breakfast Stout (CBS) and Kentucky Breakfast Stout (KBS). With all the chatter about these two beers, opinions were divided whether it is right to come to a bar or a special event for that matter just to get to try one or two specific beers. Luckily, the tension in the room was released when Tim Traynor, the Founders representative arrived at 6pm, screwed on the tap handles for CBS and KBS, and appropriately stated “let the games begin”. 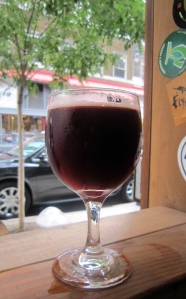 Being that the assembled crowd of eager craft beer enthusiasts (or shall I say geeks) did not know when CBS and KBS would be tapped, they arrived early and chose beers to sip on while waiting. As such, after arriving at 5:10pm I ordered Founders Blushing Monk, a 9.2% ABV Belgian Ale fermented with an abundance of pure raspberries. I should also note that this beer was the first release from Founders Brewing Co.’s Backstage Series back in May 2011 (to date 4 beers have been released in this series).

As was expected it poured a deep ruby red with lighter red hints on its edges and was topped by a one finger off white to almost pink head. Next, the raspberries were practically jumping out of my glass, and both the aroma and taste displayed their sweet and tart characteristics quite well. Underlying the raspberry flavors were hints of Belgian candi sugar, caramel, and a fruitiness that at times reminded me of red wine. Since Blushing Monk had some age on it the finish was not as sweet as I remember it being, which aided in this fruit forward beer’s drinkability. Two subsequent factors that some may not be preferred by craft beer drinkers in beers brewed or fermented with fruit surfaced as I drank more that I picked up were the following. The first being the beer’s residual sweetness building up a bit on my palate as I drank on; and the second that some chest warming alcohol heat was detectable once the beer warmed up a bit. However, in the end the only minor caveat that I personally feel is worth mentioning here is that I’d like a bit more tartness in the finish. Rating: 8/10 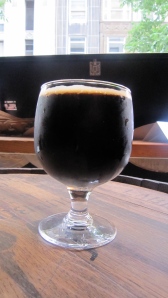 After finishing my glass of Blushing Monk I took a break from drinking to eagerly wait for the arrival the Founders rep. and the tapping of CBS and KBS. In order to make sure that I’d be able to order my glass of KBS as soon as possible after it was tapped I stood close to some of the Rattle n Hum regulars who I knew would attract the bartender’s attention soon after the tapping of these epic beers.

Upon receiving my 8oz pour of KBS I went back to my seat at the front of the bar, and though I was tempted to dig in right away, I  took a moment to admire the beer’s appearance. As I remembered it, this bourbon barrel aged imperial stout (11.2% ABV) poured an opaque dark brown to black color with a 1/2 finger of light brown head. In addition, after tilting my glass back and forth a bit I could see a moderate amount of small bubbles and the beer clinging to my glass in the form of both head lacing and alcohol legs. Upon taking my first whiff I did the “oh yeah” head bob as I was drawn in by an inviting and complex aroma which included notes of milk and dark chocolate, bourbon, oak, espresso coffee, and a touch of toffee. At first the taste was a bit rough around the edges with some oak tannins and notes of the beer’s ABV. Though I did not mind them that much because my palate was also met with delicious milk chocolate, coffee, and vanilla.

Since I knew I would only be getting my one 8oz pour I nursed it for over an hour and in turn was able to experience its full progression of flavors. As the beer warmed up the oak tannins and alcohol notes dissipated and allowed for the bourbon, vanilla, oak, and semi-sweet chocolate flavors to linger on my palate. In the end it was the smooth full body, ideal amount of sweetness, and great lingering flavors that sealed this great craft beer drinking experience for me. Rating: 9/10 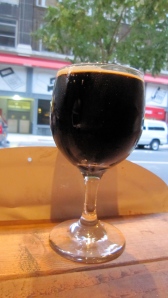 For my last beer of the night I chose one of m my go-to imperial stouts i.e. Founders Imperial stout (released in January). I should note that while I had drank this beer many times after buying a four pack of bottles, this was my first time trying it on tap. It poured opaque jet black in color with a knaki head that quickly dissipated on top of my 80z pour, but left some nice lacing and alcohol legs. Aromas of dark chocolate, espresso coffee, caramel, and a bit of smokiness were joined a hint of nutty toffee (in the background). These notes transitioned well in to the taste with the dark chocolate being met by an interesting blend of espresso coffee and earthy hops at mid palate. In the finish my palate was left  with the chocolate and espresso along with notes of cocoa and dark fruits. As I noted in my tasting notes that I wrote while drinking this beer “the blend of flavors is awesome.” True to style this imperial stout was full bodied with moderate carbonation (from being served on tap) and a well hidden high ABV (10.5%). Lastly, in my opinion it was this beer’s slightly dry finish that allowed its flavors to meld together so well and not fatigue my palate as I enjoyed each sip. Rating: 9.5/10

Adventures Into The Mind of a Beer Geek: As mentioned earlier in this post, some of my fellow bar patrons felt it was unnecessary for there to be so many beer geeks at the event who came just to have CBS and KBS on tap. On one hand I agree with them because some people who arrived after the tapping of these two beers left and went to drink elsewhere just because they missed out on what they were hoping to drink. In other words there were still lots of great Founders beers on tap after the the kegs of CBS and KBS kicked. On the other hand though two of the three beers reviewed above are amongst my favorites imperial stouts. Therefore, being presented with the opportunity to get them on tap was an experience I felt that I could not miss out on. So to sum this “adventure” up I felt lucky to have KBS on tap, especially since the keg kicked in just over an hour. Also, having two fellow beer geeks to discuss the three great beers that I drank made the experience all the more enjoyable. But if I had missed it, I would have still stayed and drank the Imperial Stout, Blushing Monk, and possibly ended the night with Founders Porter. Cheers!