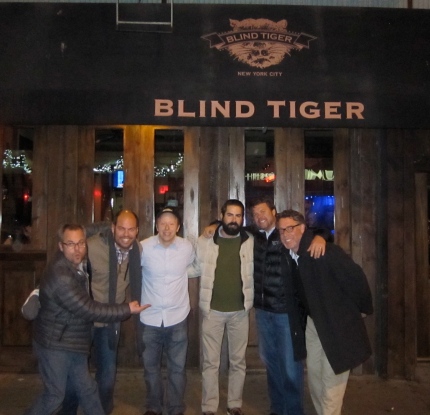 (Mike, the NY area Founders Team, and I)

On Wednesday, November 28, 2012 I went to Blind Tiger Ale House for its annual VSK (Very Special Keg) event featuring rare craft beers that the manager and owner have been saving over the past year. Beyond the excitement to try some rare beers, there was another reason why I chose to attend this special event. Mike Stevens, co-founder, CEO, and president of Founders Brewing Company (Grand Rapids, Michigan) was in attendance and excited to celebrate his brewery’s 15 anniversary with New York City fans of his beers. Having been informed by the brewery that he’d be there I brought my audio recorder with me to interview him. Overall, I was quite impressed with Mike’s excitement for spreading the messages of craft beer and the sense of humility he displayed when talking about his brewery’s beers.

The following topics were covered during the interview (podcast):