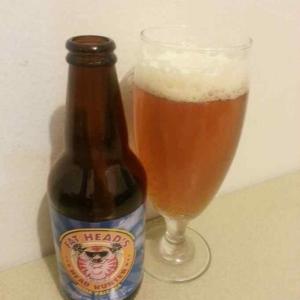 BREWERY’S DESCRIPTION: No other ingredient stirs the passion of a Master Brewer like the hop. Inspired by this legendary flower we challenged ourselves to create a world class IPA. Head Hunter is an aggressively dry-hopped, West Coast-Style IPA with a huge hop display of pine, grapefruit, citrus and pineapple. A punch-you-in-the-mouth brew for those who truly love their hops! Uncivilized? Yes. Aggressive? Absolutely. Award Winning? Hell yes! Food Pairings: Spicy Foods, Curry, Fried Shrimp, Creme Brulee. 7.5% ABV 87 IBUs For more info. click here

Having heard great things about Fathead’s Head Hunter IPA I was excited that a friend of mine offered to bring me back a four-pack from a recent trip to Columbus, Ohio. When he called me from the store I made sure that he asked a salesman how long ago the four-packs were put on shelves, so that I could ensure my friend was buying me a fresh one. Thankfully the store got a shipment of Fathead’s beers that week and the beers were therefore fresh. Nowadays the India Pale Ale beer style is the most prevalent style in craft beer; and word of mouth plays a big role in the ability of an IPA to achieve the necessary popularity needed for fresh beer to be consistently available to craft beer drinkers. Hence, with the all the hype and good reviews of Head Hunter IPA that I’d heard over the past two years; I looked forward to trying it as soon as my friend returned from Columbus.

The beer poured straw to light gold in color with a finger head that quickly dissipated to a layer of foam over the top of the beer and left great lacing on my glass. Adding to the beer’s appearance was a nice amount of carbonation rising up through the beer, which to me was quite inviting as I hoped this IPA would be refreshing and crisp. Then it was on to the hops with big notes  of sweet orange, grapefruit, peach, some floral notes dominating the aroma. From the aroma I could tell that this beer would definitely have a west coast hop profile in the taste.

That prediction was confirmed with my first sip as big citrus and peach notes hit my palate upfront followed by sweet orange coming into the picture at mid palate with floral bitterness along and dry bready malts in the finish. That bitterness built up on palate as I drank more, but never became overwhelming. In addition, the sweet orange flavor became more like orange zest as the bitterness built on palate and was joined by some tropical fruit (e.g. mango) notes, which gave the hop character a delicious juiciness that I enjoyed more and more with each successive sip.

It’s IPAs like this that make me enjoy letting them warm up despite this style being one that’s usually drunk when colder. Meaning, while the aroma and taste intensified as the beer warmed the drinkability stayed high, which allowed for an increased enjoyment of the hop character in Head Hunter IPA. If you’re a hophead (IPA lover) and can find this beer I’d definitely recommend picking up a four-pack. Rating: 8.5/10