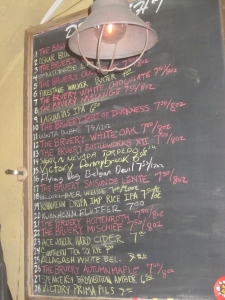 On Sunday, November 10, 2013 I went to my favorite NYC craft beer bar aka Blind Tiger Ale House for an event featuring some of The Bruery’s (Placentia, CA) most sought after beers. While there I focused on trying beers that I hadn’t tried before and had lots of fellow beer geeks to chat with while drinking them. One of them being The Bruery’s director of marketing, Ben Weiss. So after I finished enjoying most of the beers that I had hoped to get to try at the event, Ben and I stepped outside for some fresh cool air and a quick interview. Note: At certain points in the interview you’ll be able to see that I was a bit nervous (the reason I say “you know” a lot), partly because I’m just now getting back into the swing of doing interviews and partly because all my questions were off the cuff. Overall, it was great to learn about what makes The Bruery unique and innovative and I’m looking forward to all the new beers that Patrick Rue and his team have in store for 2014.

Topics covered in the interview: