Homebrew Wednesday 47: Bring On The Lupulin!

As mentioned in this past Friday’s update video this week’s HBW video consists of footage of me taking a gravity sample, giving my tasting notes on it, and then dry hopping my Double IPA. Enjoy and Happy Homebrew Wednesday. Cheers! 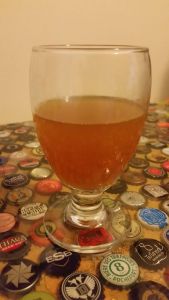 Amarillo (1.20oz) –  Amarillo® (VGXP01 cv.) is an aroma variety of recent origin, discovered and introduced by Vigil Gamache Farms Inc. in Washington State. It is most often used as a late kettle or dry hop addition to American style Pale Ales and IPA’s due to its signature aroma characteristics. Alpha Acid 8-11%, Beta Acid 6-7%

Centennial (1oz) – Centennial is an aroma variety that was released in 1990. It was derived from three-quarters Brewer’s Gold with minor contributions from Fuggle, East Kent Golding and others. It is among the most popular varieties for U.S. craft brewers and is sometimes referred to as a super Cascade. Alpha Acid 9.5-11.5%, Beta Acid 3.5-4.5%

Simcoe (1oz) – Simcoe® (YCR 14 cv.) is a bittering/aroma variety bred by Yakima Chief Ranches and released in 2000. It is used for its bittering properties and aroma qualities that impart a unique, pine-like aroma. It is very popular in American style Ales. Alpha Acid 12-14%, Beta Acid 4-5%

All of the above  information was taken from this usahops.com .pdf