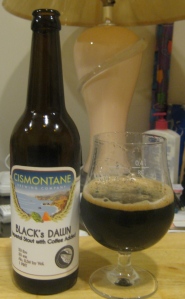 I was fortunate to receive this beer via trade after requesting some local California beers. Clocking in at 8.5% ABV with 50 IBUs, Black’s Dawn is an imperial stout with coffee added. True to its name it poured a pitch black color with a khaki head which quickly dissipated leaving a decent amount of lacing on my snifter glass. The aroma was chock full of roasty malt and coffee notes accompanied by hints of bittersweet chocolate. While the aroma was enticing, it was in the taste that this stout began to sing. My palate was met with nutty and roasty coffee, bittersweet chocolate, and hints of dark fruits, vanilla, and caramel. Initially I thought the roasty flavors would lend themselves to a lack of balance. However, as I drank more of this beer, I found that there was a moderate sweetness that melded all the flavors together and prevented Black’s Dawn from finishing with roasted malt bitterness or astringency.

As a big fan of coffee stouts I kept in mind examples that I’ve enjoyed in the past as I drank Black’s Dawn. While it did not make quite make it onto my list of go to stouts, I could see myself picking up a bottle to drink when in the mood for a balanced stout. Rating 7/10