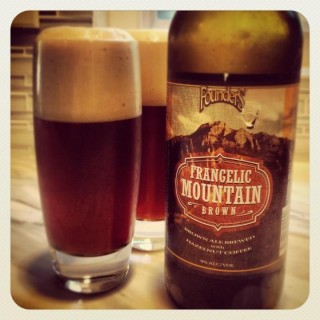 BREWERY’S DESCRIPTION
“Frangelic Mountain Brown is the quintessential taproom “one-off” beer: Founders’ brewers created the Mountain Brown series for their taproom in Grand Rapids in 2007. Frangelic Mountain Brown is the 16th iteration in the series of popular brown ales—and it likely won’t be the last. The singular characteristic of this beer comes from the use of hazelnut coffees in the brewing process. The beer has distinct aromatics with sweet and nutty flavors beautifully balanced. Founders is known for its beers made with coffee (i.e., the Breakfast Stout series), but this is both the brewery’s first brown ale and its first beer brewed with hazelnut coffees to be bottled. It clocks in at 9% ABV.”

Having tried the three previous releases from Founders Brewing Company’s Backstage Series, I was excited to try their version of a beefed up brown ale with hazelnut coffee added. Upon purchasing Frangelic Mountain Brown the big question on my mind was…How prominent would the hazelnut coffee be in the beer’s aroma and flavor profile? In addition, brown ales tend to be commonly criticized for their lack of flavor or the “wow factor” that many beer geeks look for. While I tend to avoid such “style bashing”, I still made sure to go into this beer with the same open mind that I try to have when trying any beer that I am drinking for the first time.

After splitting the 750ml bottle with my older brother I took a second to admire the beer’s magnificent dark red color, which reminded me of some english brown ales that I’ve tried in the past. Though when held up to the light I could see some hints of brown. As the beer settled it was topped with a one finger off white head, which left an attractive amount of lacing and alcohol legs on my snifter glass.

After a quick mental drumroll I put my glass up to my nose and took my first whiff of Frangelic Mountain Brown. As expected I was met by strong notes of hazelnut coffee which were followed by hints of toffee and milk chocolate, and a touch of roasted malt. The dominance of the hazelnut coffee in the aroma ushered in a bit of apprehension prior to my first sip. In other words, I hoped the same wouldn’t be the case for the beer’s taste.

Indeed the coffee was again dominant in the beer’s flavor profile. This left other typical brown ale flavors such as toffee and roasted malt character as background hints, which needed to be thought about in order to be perceived. What eased the drinking experience for me was this beer’s smooth and creamy mouthfeel. At 9% ABV, the beer glided over my palate like a 6% brown ale would and helped prevent the hazelnut coffee flavor from becoming overwhelming to my palate.

If you’re a fan of Founders Brewing Co.’s beers, brown ales, and or beers with coffee added I’d recommend giving this beer a try. Though I should note here that despite its limited availability I chose to purchase and try this bottle before making the decision of whether to pick up second one. In turn, while I did purchase a second bottle of the previous three Backstage Series beers, I decided not to continue that trend with Frangelic Mountain Brown. Rating: 7/10 (BA 3.58 / 5)

Adventures Into The Mind of a Beer Geek: As was mentioned above I tend to shy away from style bashing or better put removing a beer style from the list of styles that I enjoy drinking. This is because I feel that for every beer style there is an example or number of examples that I or any beer geek can come to enjoy. In the case of brown ales I have found various examples that I have enjoyed and then revisited over time. However, the tricky part in today’s craft beer culture is the trend where brewers take a classic beer style and up its alcohol content for a special release (or even year round) beer. Doing so introduces the risk of losing track of the original beer style’s identity in the finished product; and or as in the case of  Frangelic Mountain Brown, an added component (e.g. hazelnut coffee) can mask other flavors which could potentially represent the existence of an admirable level of complexity.