Homebrew Wednesday 68: Juggling of the Kegs

Happy Homebrew Wednesday!!! As the title for this week’s episode states I’ve been busy lately especially with transferring beers in and out of my kegs and organizing my current bottled beer stash. Therefore, I’ve decided to break down the footage that I’ve included in this episode of HBW in text form in order to add an educational element to my sharing of recent home-brewing activities.

Clip 1: Bottling the remainder of my Russian Imperial Stout

Since kegging my Russian Imperial Stout a few months ago I’ve been meaning to bottle a portion of it (using the “poor man’s beer gun” method) so I could age it for 6 months to a year. However, it wasn’t until this past Tuesday (12/15) that I actually did so…As shown in the video I decided to split the remaining beer between bottles of just the base beer and bottles with cold brewed whisky barrel aged coffee added. Just to reiterate the coffee, which I bought off my friend Merlin was aged for 6 weeks in a recently emptied 10 gallon whisky barrel and then home roasted i.e. the beer itself was not barrel aged, the coffee that was added to it was.

Clip 2: Tasting a gravity sample of my doppelbock prior to kegging.

As mentioned in the video I’ll now share my doppelbock fermentation schedule: 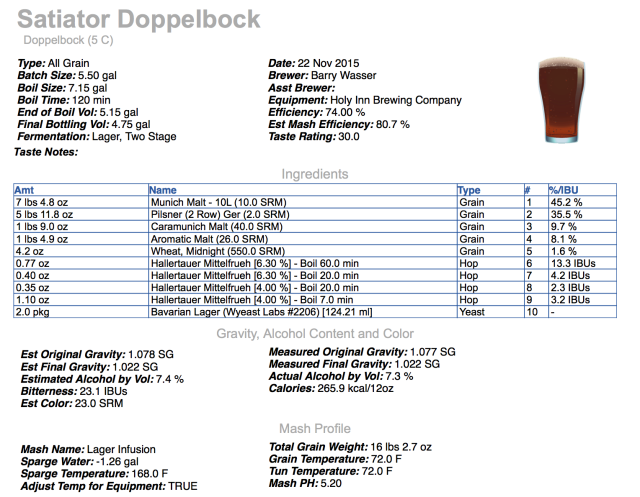 As mentioned in the video it was difficult to make the split even. The primary reason for it being difficult was my not knowing where the 2.5 mark was inside the kegs. However, as shown in the video, another reason was that I didn’t lower the siphon or tip the carboy in time to siphon in as much as I would have liked into the keg of base brown ale. Once one of the kegs kicks and I finish cleaning it I’ll definitely be filling it with 2.5 gallons of water in order to find the 2.5 gallon mark for future reference.

After showing off the new set of shelves that I purchased recently to consolidate my cases of beer; I talk about a problem of mine that I’ve been meaning to discuss in a video, my “beer graveyard”. I routinely have too much beer on hand and a good amount of it gets lost in the shuffle and becomes either undrinkable or not attractive to drink. Some examples are the following. 1) The leftover beer from a beer and cheese tasting I hosted this past June (shown in the video). 2) Hop forward beers that I don’t get to before their hop character fades beyond recognition. 3) Kegs that take quite a while to kick (finish) and I end up having to growler and or bottle up the last gallon or so. Then some of that left over beer sits around for a while and I end up dumping it. Hence, my decision to dump the last 4-5 liters of my rye IPA (shown in this video)…My goal is to find ways to prevent this problem from continuing on its current coarse. Two solutions that I’ve come up with are brewing smaller batches and or finding more opportunities to share my beers e.g. sending out more beer mail packages.

Cheers and Happy Homebrew Wednesday (or whatever day of the week you read this)!!!!