Soon after moving to New Jersey from New York City I joined the award winning WHALES homebrew club and was eager to get to know the New Jersey homebrewing scene. So when I found out about the Motown Mash homebrew competition, I quickly chose four of my beers to enter into my first NJ based competition. Judging was completed and results were announced on Saturday October 22nd and in the end my Innkeeper English barleywine took both gold in the Strong British Beer category and second place in the Best in Show round and my First Fruits Quadrupel took gold in the Belgian Dark Strong Ales category.

In the days following Motown Mash while discussing the results with the WHALES club officers, I presented my idea of giving a presentation on brewing high gravity (“big”) beers at the club’s November meeting and they enthusiastically gave me their permission to do so.

In preparation for my presentation I put together a handout which I split into two parts. The first being a list of general tips and strategies for homebrewing high gravity beers and the second being an in depth look into how I brewed both Innkeeper and First Fruits. Below I’ve included the handout and the audio from my presentation, which went better than I expected.

My Notable “Big” Beers and Their Recipes 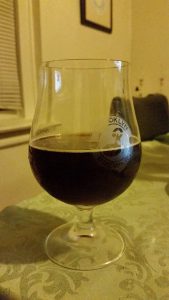 English Barleywines – While both of the barleywines that I’ve brewed since I started brewing more consistently in 2013 have won ribbons in homebrewing competitions, their brew days, fermentations, and bottle conditioning did not go as smoothly as I would have liked. However, through experiences their ups and downs I’ve learned a lot about brewing English barleywines.

Key Factors: 1) Deciding whether to use caramel/crystal and other specialty malts to add malt complexity vs using only maris otter and either a decoction or extended boil. 2) Use an English yeast strain with a higher than average attenuation rate. For example, while I used Wyeast 1968 (67-71%) in my second barleywine (the one being poured at this meeting). I could have used Wyeast 1098 (73-75%). 3) As noted above, while oxidation may benefit this style, your barleywine will most likely age better if you wax seal your bottles.

Innkeeper Barleywine: What I did, what didn’t go as planned, and what I would do differently next time.

What I did: A) As you’ll see in my recipe, I decided to use caramel/crystal and 2 other speciality malts to build my barleywine’s rich malt complexity. B) To put my own twist on a traditional English Barleywine I chose to use American hops. C) Instead of using a yeast strain with a higher attenuation rate I used one that I’d heard accentuates malt character. D) Mashed (single infusion) at 154F instead of mashing in the 150-152F range.  E) 3 week primary fermentation followed by secondary fermentation / aging in bottles. F) Bottle conditioned the finished beer instead of bottling from a keg.

What didn’t go as planned: A) I missed my target pre-boil gravity and therefore added 1.25 lbs of DME B) Despite doing so my boil off rate was not high enough (or I collected too much wort) and I missed my target original gravity by 7 points C) I meant to use Chinook for bittering, but accidently used Centennial. D) Due to my overestimating how much beer was in my bottling bucket I used too much priming sugar and the beer over carbonated and developed some oxidative off flavors. In order to do my best to “save” the beer I put the rest of the bottles into my fridge for a couple weeks to stop the beers from further carbonating. I then wax sealed them for aging.

What I would do differently next time: A) In order to balanced out the beer’s malt character I may take out the Vienna malt and replace it with more Maris Otter pale malt or DME and also use a bit less caramel/crystal 80L. B) Rather than mashing at 154F I’ll mash in the 150-152F range. C) Make sure to lower my target brewhouse efficiency and adjust my grain bill accordingly. D) Make sure to collect just enough wort i.e. 7.10 gallons as per my boil kettle’s boil off rate and the 90 minute boil. E) While the yeast(/beer) attenuated down further than my target FG I may use a more highly attenuative yeast in order to increase my chances of achieving a complex yet not too sweet finish malt character. F) If I decide to bottle condition again I’ll make sure to use less in order to avoid over carbonation. 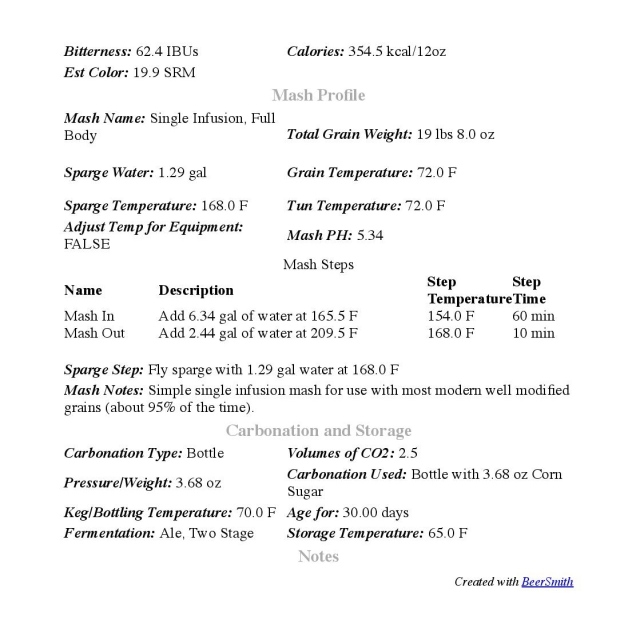 Belgian Quadrupel – Out of all of the “big” beers that I’ve brewed over the past few years, the brewing/fermenting/bottling of my quadrupel went the smoothest. Brewed as the first vintage of the quadrupel that I plan to brew each year to celebrate my wife’s and my firstborn daughter, I used clone recipes of a number of Trappist and abbey quadrupels to create my recipe. With each brew day and finished beer being a learning experience, the following is what I learned from brewing my first quadrupel.

Key Factors: 1) Deciding whether to use dark candi sugar as the primary contributor of the dark fruit and other flavors and aromas that are commonly found in quadrupels and Belgian strong dark ales or to blend the dark candi sugar with specialty malts such as Special B and Caramunich to create them along with a well rounded complexity. 2) Use noble hops like Hallertau and Tettnang to complement yeast phenols. 3) Choose a yeast strain that will likely produce the flavors and aromas that you’re looking for. Most Belgian yeast strains can handle high gravity wort. 4) Mash low (148-150F) to create a highly fermentable wort. 5) In order to create a balance of both phenols (spiciness) and fruity esters you can either do a ferulic acid rest at the start of your mash and then ferment high from the start or ferment in your yeast strain’s lower temperature end range to start and then slowly ramp up the fermentation temperature. 5) In order to encourage an active first few days of fermentation I’d recommended pitching at 68F and fermenting between 68F and 71F for the first few days i.e. when most of the yeast’s attenuation of the wort is done and then slowly raising the fermentation temperature to the 73-75F range (or higher if desired) to encourage more attenuation and the formation of fruity esters.

First Fruits Quadrupel: What I did, what didn’t go as planned, and what I would do differently next time.

What I did: A) I chose to use both dark candi sugar and specialty malts (see recipe below) to create a balanced complexity of the flavors and aromas that I hoped would be present in the finished beer. B) I used only Hallertau Mittelfruh hops and my go to Belgian yeast, Wyeast 3787 Trappist High Gravity. C) In order to create a complex candi sugar character I used a combination of D90 syrup, D180 syrup, and demerara sugar. D) Then in order to encourage the yeast to not put all of its focus on the simple sugars during the initial days of fermentation I chose to add the D180 and half of my demerara sugar with 10 minutes left in the boil and then add the D90 and the remaining half of the demerara sugar on the morning of day 4 of fermentation (raised the fermentation temp afterwards). E) The highest I took the fermentation temperature was 74F during the beer’s 3 week primary fermentation. F) Waited a month after bottling (used thicker Belgian bottles) before opening a bottle because high gravity beers tend to take longer to carbonate. 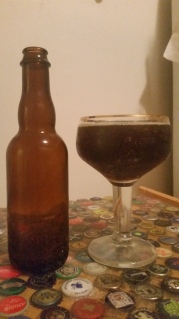 What didn’t go as planned: A) After 1 week of fermentation I eagerly took a gravity sample and it read 1.020. Luckily a fellow homebrewer told me that sometimes Wyeast 3787 takes its time when attenuating down its last 10 points and I in turn raised the fermentation temperature, roused the yeast, and waited another week before taking another sample. As my homebrewing compadre predicted my 2 week gravity sample read 1.011. B) While the beer turned out tasting and smelling really good; good enough to win gold in the Motown Mash competition, I would have liked there to be more fruity esters and spicy phenols present in the aroma and taste. C) Due to my use of Aromatic malt along with other specialty malts the beer finishes a bit sweet despite it’s 1.010 FG and is has a somewhat fuller body than some of the Trappist quadrupels that I’ve tried.

What I would do differently next time: A) I’ll use less Aromatic and Caramunich malts and add more of the simple sugars in order to encourage faster attenuation and a less full and sweet body. B) I’ll mash at 149F to create a more fermentable wort C) I’ll raise the fermentation temp higher and sooner to encourage the production of more fruity esters. D) I’ll most likely do a ferulic acid rest instead of starting the fermentation in my chosen yeast strain’s lower temperature range in order to encourage the production of spicy phenols. E) I may switch to a yeast strain that has a higher potential for producing noticeable phenols and fruity esters.