After editing together my Allagash Brewing Company full tour video I felt that the clips that I left out were still worth sharing.  Hence, in this video I present them with one comic touch thrown in. Cheers!

Tour guide Bob Kutch talks about the expansions that came along with their current 70 bbl Brau Kon brew house.

How a local farmer shares the wealth after picking up about 128,000 lbs of spent grain each week.

A description of Allagash’s fermentation temperature control software and how wort and beer are transferred into and out from the brewery’s largest fermentation tanks.

Bob talks about Allagash’s bottled vs. kegged ratio, shows us the brewery’s largest bright (conditioning) tank, and describes its distribution network and use of the Micro Star keg co-op. 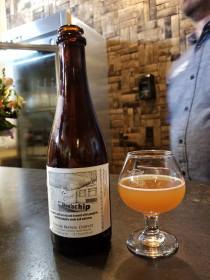 **Click this picture to view all of my photos from the tour.

While looking at pictures of founder Rob Tod brew on his original brew house (brewing system) and the painted layout of it on the floor in front of us Bob describes the story of Allagash’s gradual expansion process.

Thanks again to Bob, Lindsay, Rob, and the entire Allagash team for showing my wife and I an amazing time!!