Having not paid a visit to Allagash Brewing Company (Portland, Maine) since 2011 it was a clear choice for the first of three breweries that my wife and I would visit on our five day New England road trip…So after informing Allagash founder Rob Tod (whom I’ve interviewed three times) of my plans and direct messaging the brewery via twitter, I received an email from VIP tour coordinator Lindsay Bohanske and subsequently arranged a tour with her assistant Bob Kutch. 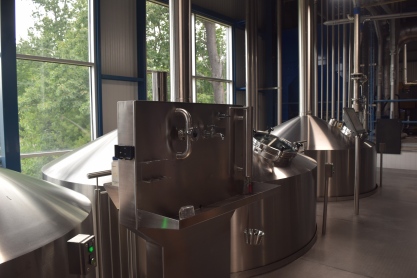 After meeting up with Bob and telling him about my 2011 visit to the brewery he made sure to point out all the upgrades and expansions that Allagash has made since then, the first of which was their 70 bbl Brau Kon brew house (brewing system). With his passion for all things Allagash showing from the beginning Bob candidly said “I’ll probably sound like a skipping record for the amount of times I say the word efficiency” as we ascended the stairs to the brew deck. In turn, while taking us through the entire brewing process he made sure to point how each step had been carefully planned and engineered for just that, efficiency and at the same time to be in line with traditional Belgian brewing practices. 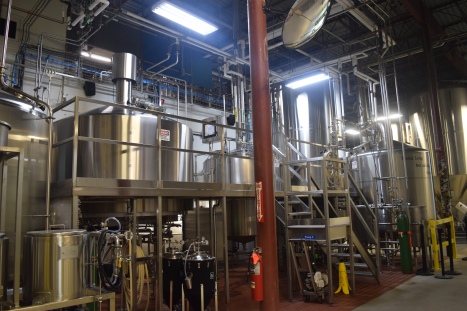 From there we moved on to the brewery’s relatively new “small” batch brewhouse. In others words, Rob Tod’s original “Frankenstein / repurposed dairy equipment” brewing system has been replaced by a 36 bbl Brau Kon system. It was here that Bob described how Allagash brews and subsequently ferments its coolship beers. As a home-brewer who has brewed and thoroughly researched sour beers (wild ales) it was great to hear about how they’re brewed on a larger scale and experience how the knowledge that I’ve gained over time is also being applied at Allagash with so much passion and attention to detail.

Following along in the brewery’s main building; we then got an extensive overview of its larger fermentation tanks in an area known to Allagash staff as the bunker which included the following. How the tanks are filled, how long the beer remains in them, all that goes into controlling temperature during and after fermentation, and what happens to the beer once the tanks are emptied. Later on, we were also taken through the bottling and packaging areas (not shown in the above video) and I was surprised to learn that as a Belgian ale focused brewery Allagash kegs more beer than it bottles and that California (a state on the opposite coast) is currently its largest market. 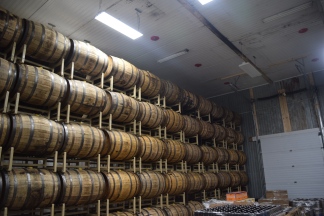 Across from the “small” batch brewhouse is the “Curieux room” where Allagash Tripel is aged in Jim Beam barrels for 5 weeks and then blended with fresh Tripel to bring it down to 11% ABV. Both my wife and I were both impressed by the scale at which Allagash is able to produce this complex tasting barrel-aged beer year-round. 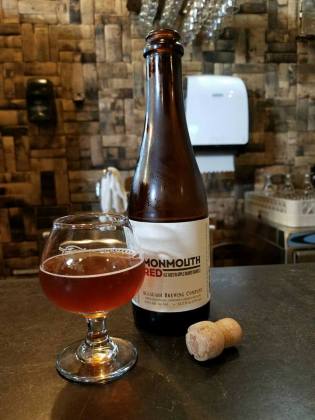 From there on the remainder of our tour focused on the production and fermentation of Allagash’s sour and spontaneously fermented ales. After a quick look at the barrels in which most of these beers are aging we moved on to where they’re packaged and aged on a larger scale. It was there that after a detailed description of aging their sour beers on fresh fruit (see video) we got to taste some amazing examples at Allagash’s “VIP bar”, which is comprised of a bar area made mostly out of barrel staves, a fully stocked fridge  of sour/wild ales, and a lounge area with leather arm chairs and lots of beer décor. The first beer that we tried was Ghoulship aka Allagash’s Halloween beer. Though its being fermented with wild microflora makes it different from other pumpkin ales from the start, I particularly liked that it’s not brewed with pumpkin pie spices which allows for the flavor of the pumpkin itself to shine and blend quite impressively with the flavors from the wild yeasts and bacteria. Next, Bob popped the cork of a bottle of Monmouth Red, a Flanders-style red ale that’s first fermented with Allagash’s house yeast in stainless steel tanks and then aged with Lactobacillus and Pediococcus for 18 months in an oak foudre. It is then transferred to freshly emptied Laird and Company apple brandy barrels where it ages for an additional 12 months before being blended and bottle conditioned (allagash.com). Bursting with dark cherry, apple brandy, vanilla, and oak flavors; this beer blew my mind and was elated when Bob later found a bottle that I could enjoy again at home. 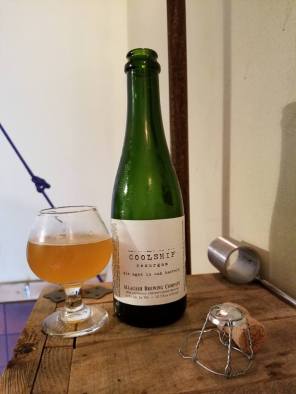 Saving the best experience for last, Bob grabbed a bottle of Coolship Resurgum for us to enjoy in the coolship itself. Upon entering the coolship he poured each of us a glass and we discussed our thoughts on the beer of which mine were the following. I felt that Resurgum had a more mild “funk” and tartness than the gueuzes of Belgium (e.g. Cantillon) that I’ve tried, while at the same time a more balanced complexity (mild funk, tart lemon, oak, bready malt sweetness, and a semi-dry finish) from the first sip which in the end made it quite drinkable and approachable. As shown in the video above Bob then concluded the formal portion of the tour with a detailed description of the construction of the coolship (e.g. how the rough cut pine ceiling harbors dormant wild yeast and bacteria which is constantly being brought inside through the windows that are always open and a fan which circulates the incoming air) and the excitement around the brewery on coolship beer brew days.

Though we knew that we’d be shown more of the brewery than on their general tour. Both my wife and I were blown away by how in depth and fun our tour was from start to finish.

Thanks to Bob, Lindsay, Rob, and the entire Allagash team for the tour, tasting, and never ending dedication to brewing high quality Belgian-style beers! Cheers!

NJ (formerly NYC) based home brewer and craft beer enthusiast sharing his brewing and imbibing adventures on thebrewedpalate.com. "Spreading the messages of craft beer one palate at a time."
View all posts by Barry W →
This entry was posted in Brewery Tour, Uncategorized. Bookmark the permalink.