Though I’ve continued homebrewing since my last blog post my life has gotten significantly busier and my motivation to create posts about my brewing adventures has admittedly diminished. However, I would be remised if I stopped posting completely because too much of what makes my passion for all things beer stay strong is sharing it with others. Below are the beers that I’ve brewed in the recent past.

My ode to Lord of the Rings…In terms of sticking to traditional this version was brewed with floor malted Maris Otter pale malt, noble hops, and fermented with an English yeast strain. However, for version 2.0 I decided to use German noble hops instead of English varietals. The beer turned out great and the malt character that became more apparent as the floral and spicy hop character faded was definitely more inviting than my first iteration of this recipe/beer. I think that for version 3.0 I’ll keep the German hops, but take out the honey malt to let the floor malted Maris Otter shine.

Brewed in preparation for and celebration of my son’s birth, this 12% ABV barleywine turned out better than expected. It’s recipe was/is an amped up version of a Firestone Walker Sucaba clone recipe that I found in Brew Your Own magazine. Because I started with just over 22 pounds of grain, I decided mash using the reiterated mashing method. While I still had to correct my preboil gravity with dry malt extract (DME) my original gravity (OG) ended being 1.118. I fermented the wort with Wyeast 1098 British Ale for 4 weeks and then bottle conditioned the beer. At first the 2.2% roasted barley gave the beer a slight roasty quality, but after 2 months in the bottle it faded significantly. Next time I’ll either take out the roasted barley from the recipe or less since it’s mainly there for color.

For the third iteration of my award winning quadrupel which I brew annually in honor of my daughter I decided to make two changes to the base recipe First I added some white wheat to add some “fluff” to the mouthfeel. Then after primary fermentation I transferred the beer to a secondary fermenter and added 3oz of medium toast oak cubes and half a bottle of cabernet sauvignon wine. After 4 weeks in secondary I bottled the beer with demerara sugar and champagne yeast. While there was some bottle to bottle variation in terms of oak flavor I’m happy with how this vintage turned out. 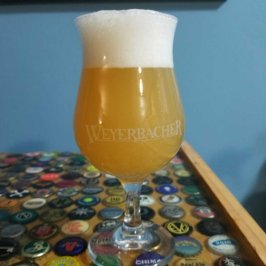 Inspired by my friend Nate’s infamous house pale ale recipe I decided to ferment his recipe with saison yeast (The Yeast Bay’s Saison Blend 2). In addition to the blend of pale and Munich malts, the combination of Galaxy and El Dorado hops proved to make sure an awesome aroma and flavor profile. When tasting the finished product I picked up both the classic tropical notes from the Galaxy hops along with some added ripe melon and pear notes which I assumed were added by the El Dorado hops. 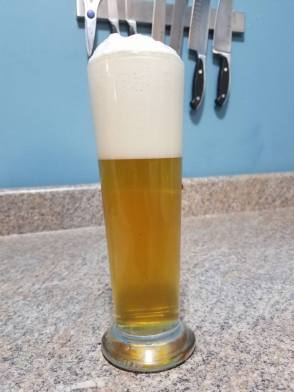 Having enjoyed the first two versions of my pilsner I decided to change up the hops for this one. Meaning, in addition to the Magnum and Spalt Select hops, I used hallertau blanc instead of Saphir hops. At first the finished beer tasted quite similar to the previous two versions, but over time the tropical notes from the Hallertau Blanc hops came out and made this beer quite sessionable. Next time I brew this recipe I may combine the Saphir and Hallertau Blanc in order to find out how much complexity can be added to my original recipe. 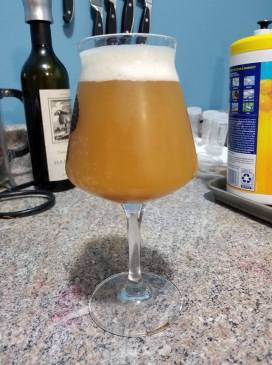 This was my first post-baby birth brew day and lots of things both on and after brew day did not go as planned. Hence, I hope to write up a separate blog post about the finished beer.

NJ (formerly NYC) based home brewer and fermented food enthusiast sharing his brewing, cooking, and baking adventures on thebrewedpalate.com.
View all posts by Barry W →
This entry was posted in Uncategorized. Bookmark the permalink.