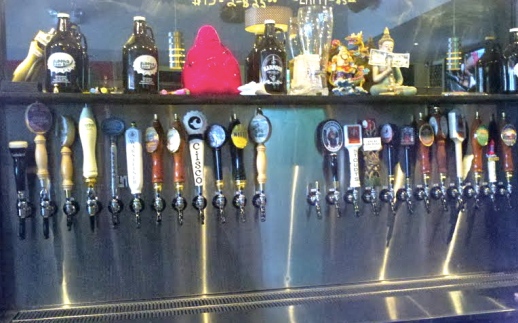 After many weeks of planning and then not visiting Buddha Beer Bar, a Washington Heights craft beer bar; I decided it was finally time to check it out and of course introduce myself to the management. Upon arriving  beer manager Brian Duffy commented on my Beer Advocate t-shirt and I immediately engaged him in conversation about my blog. Specifically about my recent visit to Flying Dog Brewery and the amazing beers that I was fortunate to try there. 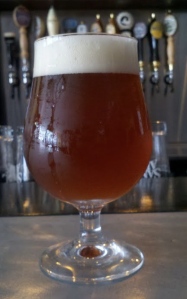 What finalized my decision to walk over was them having Brewery Ommegang’s most recent release Biere D’Hougoumont, a 7.3% ABV biere de garde aged on oak and maple staves on tap. Pouring light amber with an attractive golden hue and a 1.5 finger head, I was definitely excited to dig into this beer. Upon taking a sniff I was drawn in my its tart wheat malt, nutty, lemony, and sweet biscuity malt aroma. Following nicely into the taste, my palate was met with crisp pale malt, sweet breadiness, maple syrup, and a hint of lemon. After letting the beer warm up a bit the maple syrup notes blended quite nicely with the malt profile and some additional lemon and banana notes became apparent in the finish. In terms of the mouthfeel, Biere D’Hougoumont’s malt forwardness contributed a bit of heft along with its alcohol content, but did not prevent me from taking continuous sips as I reveled in its spot on flavor profile. I look forward to picking up a couple bottles of this beer to see how is differs from this on tap version. I should note here that since the bottled version is bottle conditioned, the beer should feature a deeper maturity of flavors; especially as it ages over time. Rating 8/10 (for being so spot on for the style). 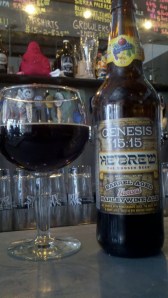 While I was enjoying Biere D’Hougoumont, Brian surprised my friend Caleb and I with a bottle of Shmaltz Brewing Company’s 15th Anniversary 15:15 Barrel Aged He’brew Harvest Barleywine (13.4% ABV, bottled 9/7/11). After reading its label and seeing that it was brewed with pomegranate, fig, date and grape juice and then aged in rye whiskey barrels, my inner beer geek was awakened and dying to see what it had to offer. As expected this special beer poured opaque black in color with a small ring of tan foam, which left lots of alcohol legs on my glass. While this beer was aged in rye whiskey barrels, its aroma and taste both reminded me of beers (e.g. Imperial Stouts) aged in bourbon barrels. Meaning, I was met by pungent notes of whiskey, vanilla, bittersweet chocolate and toffee. All of which made for a deliciously smooth beer that hid the high alcohol content quite well. As a barleywine I kept up my search for some hop character as I sipped on and was eventually able to pick up hints of sweet piney hops in the finish. In fact it was the hops and barrel aging that allowed this beer to finish with just the right amount of sweetness so that my palate wasn’t too hampered down with heavy sweetness. I will definitely keep an eye out for a bottle of this one to put in my beer cellar. I think with some age the whiskey character will mellow out a bit and the flavors from the fruit juices and hops will emerge. Rating 8.5/10. 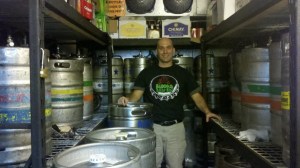 As I drank the beers just reviewed I continued to chat with Brian and eventually he invited me to take a look at the bar’s keg fridge. In other words the fridge where both the on deck and on tap kegs are kept cold. One keg that stood out was Flying Dog Gonzo Imperial Porter (Nitro), one of my favorite beers. Having had this beer on nitro-tap recently, I can say that all who try it are in for a treat.

The last two beers that I tried were ones that Brian brought out from the fridge. Though we both knew that they wouldn’t be exceptional I was open to trying them. The first was Shiner Ruby Redbird, a 4% ABV summer seasonal brewed with ginger and pink grapefruit juice. Color-wise it was straw with a hint of pink from the grapefruit juice. With a quick sniff I picked up the ginger and grapefruit along with some wheat malt tartness. Then as expected the aroma did not follow into a flavor profile that was impressive by any means. Meaning, while the grapefruit and ginger were clearly there, there was practically no beer taste underneath. In my final sips I was able to pick up a lager like taste, which kept me interested in seeking out other Shiner beers to see if the Spoetzl brewery has some more attractive offerings (e.g. the famous Shiner Bock). Rating 3/10. The last beer was Tyskie Gronie (Grand Prix), a Euro Pale Lager (5.6%) from Poland. It too was quite mild in flavor. Its redeeming qualities were its notes of grassy hops and lightly sweet pilsner malts. In addition, compared to other pale lagers its flavor profile was not offensive at all. While I wouldn’t go out of my way to buy it, I would drink a bottle if offered one while outside on a really hot summer day. Rating: 4/10.

Overall my first visit to Buddha Beer Bar was great. Its knowledgeable and welcoming staff made me feel at home as both a bar patron and craft beer geek. Being that I live quite close by I will definitely be going back there as often as possible. One special event that I will definitely be attending is a Brooklyn Brewery event being held on 7/19. With brewmaster Garrett Oliver expected to be in attendance I can predict that the event will be quite amazing. Cheers!