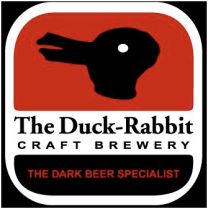 This past Saturday night (7/7/12) my brother and I sat down to enjoy a bunch of beers, some of which were from our cellar, while others were ones we picked up recently. Two beers in the later category were from Duck Rabbit Craft Brewery, a small yet well known craft brewery from Farmville, NC. Having not drank a beer from them in a quite a while, I was excited when my brother called me from Philadelphia and told me that he picked up some of their Barleywine Ale and Rabid Duck Russian Imperial Stout for us to try. 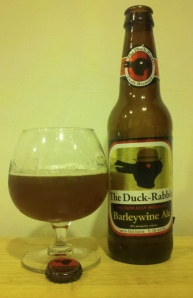 Duck Rabbit Barleywine Ale (11% ABV): Being that we aimed to open a bunch of beers that night, we decided to split the bottle. It poured amber to light ruby red in color, with moderate carbonation, and was topped with an off white head that surprisingly stuck around till I finished my glass. As expected the beer left lots of alcohol legs around my snifter glass. Moving along with the impressive characteristics of this English style Barleywine, its aroma consisted of a mix of stone and dark fruits from the hops and yeast and a touch of toffee and caramel. At times it was hard to pick out specific fruits, but the combination made me want to savor my 6 ounces for as along as possible. On the palate I was met with the juicy fruitiness from the aroma, which I came to eventually describe as a mix of apricot, peach, apple, cherry, and date. The hints of toffee and caramel also were present,  but remained as  background flavors. The mouthfeel of this beer ranged from medium to full as the beer warmed up and released its complexities. Overall, this barleywine was quite unique and drinkable for its style (I did taste a bit of the ABV). I have a second bottle which I will mostly likely age for a year in my cellar to see how it matures.  Rating: 8/10 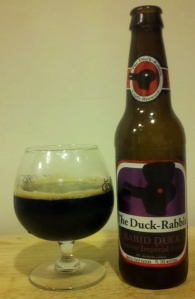 Duck Rabbit Rabid Duck (10% ABV): Before even opening and diving into this Russian Imperial Imperial Stout I was excited to try it for two reasons. Firstly, as one of my favorite styles I am always looking for new imperial stouts to add to my list of go-to beers. Secondly, being that their slogan is “the dark beer specialist”, I hoped this dark beer would be a great one. Appearance-wise Rabid Duck poured spot on for its beer style with an opaque black body and a one finger light brown head that dissipated quickly and left some lacing and a good amount of alcohol legs. It was in the aroma where my confusion with this beer began. While the typical roasted malts and dark chocolate were there, a slightly off putting dark fruit tartness made me a bit apprehensive to take a sip. The taste was much like the aroma in that the tartness and slight astringency were prominent and were accompanied by a nice lingering roasted malt character and hints of chocolate. As it warmed up the mouthfeel was on the medium side, though for the most part I think there was a bit too much carbonation for the style. If you like roasty imperial stouts you may like this one, but I can’t give it a confident recommendation. Rating: 5.5/10

NJ (formerly NYC) based home brewer and fermented food enthusiast sharing his brewing, cooking, and baking adventures on thebrewedpalate.com.
View all posts by Barry W →
This entry was posted in Beer Reviews. Bookmark the permalink.