On Tuesday July 10, 2012 Rattle n Hum, a popular NYC craft beer bar held a special event with 12 of its 40 taps pouring Green Flash Brewing Co. beers. Known for their hoppy west coast style beers, I was excited to see a balance between hoppy and European-style beers on the tap list. As I do at many of Rattle n Hum’s  events, I started off the night with a flight of the four Green Flash beers that I had yet to try and wrote down tasting notes as I drank them.

East Village Pilsner (Bohemian Pilsner, 5.3%* ABV) – Having heard good things about Green Flash’s Fizzy Yellow Beer, I was excited to see what this beer had to offer. It poured pale straw in color with a moderate amount of carbonation and a white head that left spots of lacing down my glass. True to style its aroma consisted of lemon peal, grassy hop notes, and some toasty pale malt. While I do not drink pilsners that often, I could tell from the aroma that this one would be spot on for its style. Upon taking my first sip, my palate was met with assertive and crisp grassy and lemony German hop flavor and bitterness that mixed with some semi-sweet bready pale malt at mid palate and made for a smooth finish. * I should note that while Ratebeer has this beer clocking in at 5.8% ABV, a picture on the Green Flash website has it at 5.3% ABV. This dilemma was of concern while drinking East Village Pilsner because the ABV was perceivable in the finish. However, with its crisp and robust hop character, there was enough of a balance for me to be left hoping to find it on tap again some time. Rating 8/10

Saison San Diego (Saison / Farmhouse Ale 4.2% ABV) – Formerly called Summer Saison, this beer poured straw in color with some haziness (it’s unfiltered). Going from most to least prominent, its aroma included bubblegum, wheat malt tartness, clove, and grassy hop notes. These characteristics followed into the taste as the beer danced on my palate due to its carbonation level and “lower end of medium” body.  As I took my final sips, the lemon flavor came out a bit more and the sweet / somewhat tart malt and bubble flavors lingered in the finish. Overall, I feel that this beer is spot on for its style. However, I was left hoping for some additional farmhouse yeast character (spiciness and earthiness). Rating 7/10

Retro Extra Pale Ale (American Pale Ale, 4.9% ABV) – Moving onto the hoppier beers in this flight this pale ale was pale orange in color and had an off white head. Upon taking a whiff I was surprised to pick up floral and grassy hop notes instead of the characteristic west coast citrusy hop flavors known to come out of San Diego breweries. I also picked up some toasty caramel notes from the malts used in this beer. Next, the taste reminded me more of an English pale ale in that the hops were more of a background flavor component and the bitterness was quite low. Though I could attribute the flavor profile of this beer to a freshness issue, the sample I had that night left me wanting something more e.g. a more assertive and or unique hop character. Rating 5/10

Green Flash / Founders Linchpin White IPA (American IPA, 7% ABV) – As the final beer of this flight, I hoped to have saved the best for last. This collaboration beer poured gold in color with a slight cloudiness, which was expected due to the use of wheat malt in this beer. In addition, its white head left a considerable around of lacing on my glass. Though a bit subtle, its aroma included notes of lemon peal, grapefruity and floral hops, and a caramel malt backbone. Having been released fairly recently I was surprised that the flavor profile of this beer was quite malt forward (freshness issue), which masked a lot of the IPA and witbier character I was looking forward to tasting. Luckily, it did finish with some lemon notes and moderate bitterness. When looking pasted the masked flavors, I found the ABV to be masked quite well and that the beer’s body was medium. Rating 6/10 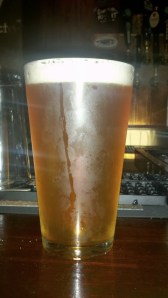 For my final Green Flash beer of the night I chose to order a pint of a beer that I get every time I see it on tap. Named for a San Diego street that has a lot of craft beer bars, 30th Street Pale Ale (6% ABV) poured gold in color with an attractive 1 finger white head. In true San Diego style, its aroma boasted a juicy grapefruit and orange hop character that was balanced by just the right the amount of bready maltiness. These flavor characteristics translated directly into the taste with the grapefruit notes being brighter upfront and then blending with the juicy orange hop notes at mid palate. These flavors left the malt to round out the bitterness and help me appreciate the utter juiciness of the hops. As such, what I like most about this beer is that unlike many hop forward San Diego beers, its juicy hop flavor lasts into the finish instead of leaving the palate with a lingering dry bitterness.  Rating 9/10