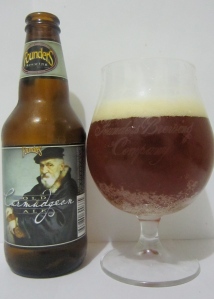 Though Founders Brewing Company (Grand Rapids, Michigan) releases their Curmudgeon Old Ale in the Spring, I tend to reserve my drinking of old ales and barleywines for the Fall and Winter. Hence, when I contacted the brewery to let them know about my blog; I was excited when they offered to send me a couple bottles of Curmudgeon Old Ale in time for the arrival of the colder Fall weather.

As you can see in the picture above, the beer poured a beautiful Amber color with orange hues around its edges. It was topped by a half finger off white head, which quickly dissipated to a ring around the top of the beer and left some nice lacing and alcohol legs on my founders brewing co. snifter. In addition, though a fair amount of carbonation was visible  around edges of the glass after pouring the beer, it did not translate into too much carbonation in the taste (on the palate).

After admiring Curmudgeon’s appearance I took a nice whiff of this malt forward beer’s rich aroma which consisted of robust caramel, brown sugar, toffee, and molasses. All of which reminded me of a scotch ale, but after a couple more whiffs I picked up on the beer’s drier and not as sweet smelling old ale character. At 9.8% ABV there were some boozy / fusel alcohol notes in the aroma, but not enough to get me worried before my first sip.

The taste was similar to the aroma, but a little less intense (complex). Caramel, mollasses and brown sugar blended together as an overall sweet / big malt flavor. The ABV booziness was there, but helped the beer’s drinkability by drying out the finish and contributing a pleasant warmth after the swallow. This indicated to me that this beer would be best as a night cap or sipper during the colder months of the year. At times I picked up hints of bright dark fruits like cherries and plums, and also a bit of earthy hops. Though the oak aging didn’t come through for me I came to the following conclusion as I finished the 12oz bottle. Curmudgeon Old ale has an authentic English old ale feel, it’s somewhat on the simple side but very well done. Its sweetness is kept in check and flavor is pleasant and straight forward, “like a drier less caramelly wee heavy.”

Overall this beer had a medium / smooth body, which helped me analyze the malt character and pick up the fruitiness that lingered with the brown sugar sweetness after each sip. In my tasting notes (written while drinking) my verdict was “Very solid old ale from Founders, comes off as traditional and classic…would have liked the oak to come through though and there to be a bit more complexity in the flavor profile…still spot on for the style…fruity esters were balanced quite well with the malt flavors which is hard to achieve with this English traditional beer style.” Rating: 7/10