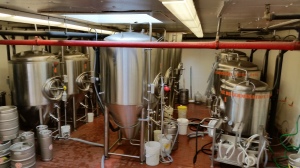 Click here to view my photos from brew day.

As a NYC’s newest homebrewing club, The Brewminaries have been fortunate to get off to a great start that has been chock full of opportunities to set them up for success. One such opportunity was presented to them by John LaPolla, co-owner of our beloved local homebrew shop Bitter & Esters. Having been asked if he wanted to brew a 5 barrel (155 gallons) batch at Rockaway Brewing Company (Long Island City, NYC) by co-founder and head brewer Marcus Burnett. John thought it would be a great idea to involve The Brewminaries i.e. the club which I am now the treasurer of, formed after coming together as the Bitter & Esters SWAP Team at NYC’s first Brewnity event on February 22, 2015. To quote John himself, “And in what is turning out to be typical Brewminary fashion, they jumped right in with gusto. We decided that they should come up with the recipe and after some wrangling and horse trading, they came up with a rye pale ale hopped with Galaxy and Mosaic hops. Ryes of the Brewminaries was born!”

On Wednesday, March 18, Brewminaries club officers Sheri Jewhurst (“Dictator”), Robert Sherrill (Events Co-Chair), and I  joined Bitter & Esters owners John Lapolla and Douglas Amport and Rockaway Brewing Company co-founder and head brewer Ethan Long to brew our first club beer aka Ryes of the Brewminaries. Ethan put us to work, making sure we took part in every part of the brew day including everything from milling the grains and adding the hops to yes, you guessed it, the cleaning of the mash tun, the brew kettle, and anything else that was used to during our brew day. Surprisingly though, despite being an annoying but necessary process as a homebrewer, all of us enjoyed doing the cleaning because it helped us appreciate all the hard work that goes into brewing on a larger than 5-10 gallon scale. Especially after experiencing the ability to add a pound or more of amazing smelling Galaxy and Mosaic hops per addition.

Throughout the brew day the Rockaway staff made us feel at home. They gave us freedom to try all 8 beers that they had on tap and even ordered us pizza for lunch. Once the wort was cooled, transferred to its 5 barrel fermenter, and John pitched the yeast (Wyeast 1056) we returned to the tasting room to share some of our home-brews with Ethan, Ray (brewer and cellarman), and the tasting room staff. As a special treat I brought brownies that I baked with the my chocolate oatmeal milk stout so that everyone could pair them with samples of the beer itself. From Ethan’s positive reactions to our home-brews (he asked for seconds of my double IPA) and eagerness to help us fully understand the ins and outs of brewing on his 5 bbl system, we all could tell that he was glad to have brewed with us and is just as excited as we are to taste the final product when it’s released in the beginning of May.

On behalf of The Brewminaries I’d like to thank Ethan, Marcus, Ray, Justine and the entire Rockaway Brewing Company staff for allowing us be professional brewers for a day, being so accommodating while we brewed together, and supporting our new homebrewing club. In addition, a BIG thank you goes out to John, Douglas, and the entire Bitter & Esters staff for bringing The Brewminaries on board for this collaborative brew and for your continued support of our goals and activities.

Next up for The Brewminaries…A dry hopping schedule experiment featuring a Pliny The Elder clone recipe as its basis / inspiration.