On Sunday, July 19th I brewed my third IPA of 2015, Millennium Falcon Rye IPA. I chose the name for two reasons. First, I used Millennium and Falconer’s Flight hops (and some Columbus hops), along with three varieties of rye: rye malt, flaked rye, and crystal rye. Secondly, two of my fellow NYC homebrewers brewed a double IPA with the same hops and no rye; that beer was so impressive that I had to brew my own version of their recipe. In addition to this beer’s recipe being new and my own, this brew day served as the first test of my new 10 gallon brew kettle from The Brewed Palate’s newest sponsor Ss Brewing Technologies (BrewTech). A full overview/review video of the kettle itself will be uploaded ASAP that’ll include my full opinion on how the kettle performed during its “maiden voyage”. Though I will say that it nice to have my older 10 gallon aluminum kettle to use as an HLT. 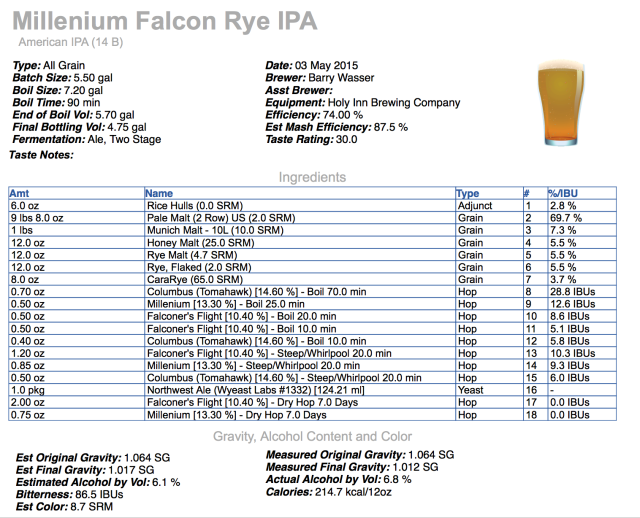 Keys to this recipe:

*All of the hops that were used for this beer were provided by yakimavalleyhops.com for the purpose of the promotion of homebrewing with hop varieties from the extensive variety that they carry year round.