As I discussed in my previous blog post, this past Sunday’s imperial stout brew day did not go so smoothly and I therefore did not film as much as I would have for a full brew day video. I did however film a few clips detailing my reactions to the “hellish mash”, talking about the wort’s original gravity, and the start of fermentation. Hence, this week’s Homebrew Wednesday video start with that footage. Then it transitions from the panic of brew day struggles to the bliss pouring a glass of my most recent beer aka Millennium Falcon Rye IPA and giving you my initial tasting notes.

Aroma: At times the citrus hop notes that I picked up in the aroma and taste of this beer reminded me of Bells Two Hearted IPA in that grapefruit and orange were balanced with a fragrant floral quality that blend really well with the spiciness coming from the Millennium hops and rye malts (rye malt, flaked rye, and crystal rye). As the beer warmed I picked up I picked some peach notes and hints a freshly pealed lemons and grapefruits. While I enjoyed the aroma I was left hoping for a big more pungent fruitiness.  9/12

Appearance: The beer poured an attractive dark gold to amber (darker depending on lighting) with an off white fluffy head that hung around for most of my first glass and left minimal lacing behind. There was definite dry hop / rye haze, but from the level of clarity of this first glass I expect the beer to clear up over time. 2/3

Flavor: The taste followed the aroma quite well with a burst of citrus and floral hops quickly followed by a dry rye malt and Millennium hop spiciness which followed into the finish. As the beer warmed more orange marmalade notes came out and blended with the floral and spicy hop and malt flavors. What I liked most about the flavor is that hops and malts stayed in balance the whole time. Also, the beer didn’t finished quite clean and didn’t leave too much bitterness (86 IBUs) on my palate. With a bit more fruity hop flavor this beer’s flavor would be pretty much perfect. 16/20

Mouthfeel: This first glass had a medium mouthfeel with a great smoothness and creaminess from the rye upfront and finished with just enough dryness/bitterness and rye bite. At times a picked up a touch of astringency, but it never became overwhelming. Despite being carbonated for three days at 30 PSI and one day at 10 PSI, I still feel that the beer needs a bit more time to fully carbonate. 4/5 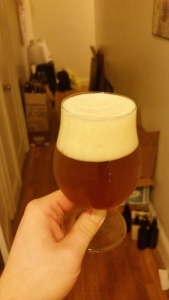 Overall Impression: As a 6.8% ABV rye IPA this beer is quite drinkable and I’m quite happy with the final result. At stated above I would just like some juicy hops upfront. So I’ll probably revert back to Wyeast 1272 next time and use more Falconer’s Flight hops in the aroma and flavor hop additions. I could see myself drinking this with spicy chicken wings and sausages and even an overstuffed corned beer or pastrami sandwich. Either way the hops and rye in the beer with complement the food and cut through any fat that’s present. 8/10 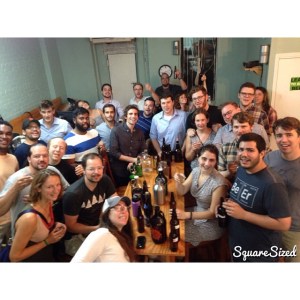 All three of the beers that I brought to Bitter and Esters’ August beer swap were well received. I first shared a 32oz growler of my Tradition, Tradition hefeweizen and the main characteristics that my fellow home-brewers complemented it on were its balance and level of complexity. I completely agreed with them on those points, but next time I brewed this recipe I’d like to try using only German pilsner malt and white wheat and exclude the aromatic malt (melanoidin malt) in order to bring a bit more crispness to the beer.

I then cracked open a couple bottles of my Tart Tense saison which had just hit the two weeks in the bottle mark. While most of those who tried it were taken aback by its high level of lactic tartness, once discussion about the recipe ensued and they sipped more slowly, they were able to pull out flavors such as lemongrass and dill from the Sorachi Ace hops. If I do use The Yeast Bay’s Farmhouse Sour Ale blend again I will definitely make a starter to give the saison yeast strains a chance to exert themselves before the lactobacillus strains swoop in and aid their lactic tartness. If not I’d still like to brew a saison exclusively with Sorachi Ace hops to have on tap.

Lastly, I removed the green wax and cracked open a 22oz bottle of my 2014/15 Innkeeper Barleywine, which has been in bottled since November 2014. Before I discuss reactions to it a short back story is needed. Back in February of this year I got a 27/50 score at NYCHG’s Homebrew Alley competition. Judges said it was overcarbonated and had some off flavors, which I humbly agreed with. As a result I placed the rest of the batch in my fridge and keezer to stop it from carbonating further. After 2 days I wax sealed the bottled and allowed them to age for 6 months. In turn, bringing them to the beer swap was my way of doing a status check on the beer. Thankfully my steps to “save” the beer were successful and the beer, though still a bit over carbonated, is aging nicely and it a few months away from reaching its prime. As of the swap (8/5/15) its most prominent flavors are rich caramel and toffee with hints of date and fig. I’m hoping that some sherry notes will enter the equation in the next few months to complete the aged barleywine flavor profile that I’m aiming for. I’ll probably open another bottle in October and then make the call on whether I can start opening bottles more often.

Cheers and Keep on brewing!