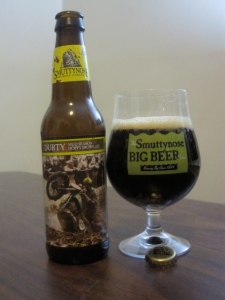 After enjoying the balanced pairing of Big A IPA and cheddar cheese Patrick and I moved on to the final hop forward beer of the tasting. Durty, a “mud season hoppy brown ale” is the newest beer to Smuttynose’s seasonal line up of beers and has recently hit the market after receiving rave reviews as part of Smuttynose’s Short Batch series. Hence, the bottle that Patrick and I shared was quite fresh. In this video we taste the beer, discuss the story behind the beer and its packaging, and then pair it with cheddar cheese and dark chocolate.

Available in six packs, twelve packs and cases of 12 ounce bottles as well as 5.2 gallon and 15.5 gallon kegs. Durty will be hitting markets throughout the month of January.

Stay tuned for the tasting of 3 more Smuttynose beers…Next Up: Barleywine Ale