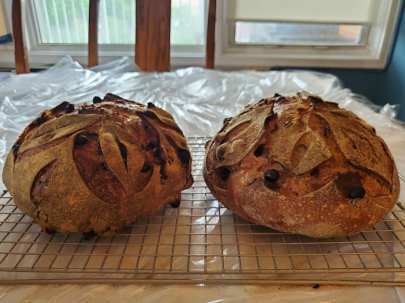 Recipe: The inspiration behind this recipe came from my middle and high schools years when I would often eat cinnamon raisin bread and cream cheese sandwiches for breakfast on my way to school. To get started on my sourdough version of this nostalgic bread I searched for a recipe to base mine off of and found this Baked – the blog recipe. Because the blog post for this recipe gave a lot of suggestion for customization I took stock of ingredients that I had on hand and landed with the following recipe. 70% bread flour, 20% whole wheat flour, and 10% dark rye flour. Followed by 21% levain (Mortimer), 2.2% salt, 16g cinnamon (added during mixing of dough), and 250g raisins. As with the previous recipe, I decided to forgo autolysing the flour for this recipe. 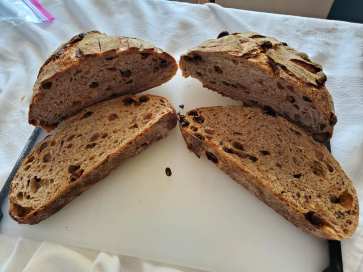 Results: Flavorwise both boules came out tasting great. However, due of the added sugar from the raisins and my not significantly changing my heat deflection technique (see previous recipe). The more well caramelized portions of the bottom crust at times added a somewhat bitter quality to the taste. Next time that I bake this recipe I will definitely add the raisins and cinnamon as instructed by the recipe that I was following. Firstly, because the loaf that I baked in my challenger bread pan had a considerable amount more raisins in it. Secondly, some slices (from both loaves) had the majority of their raisins towards the bottom rather scattered throughout. Appearance-wise my scoring didn’t turn out as planned, but turned out attractive nonetheless.

For more pictures of these loaves and all of my sourdough recipes click on the ‘Sourdough Baking Journal’ page above.