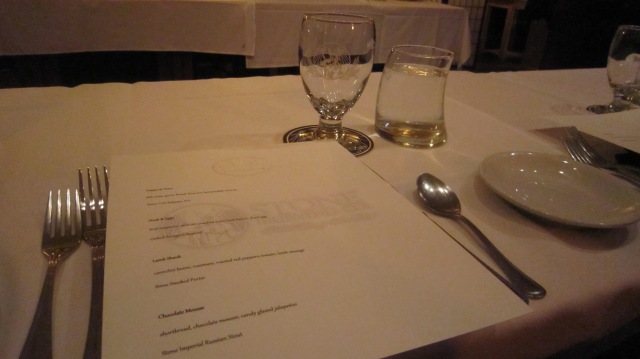 As an orthodox Jew and craft beer geek I’ve found two limitations to fully experiencing what craft beer has to offer. The first is not being able to attend events on Friday nights, Saturdays, and on holidays throughout the year. The second and most frequent limitation is from my keeping kosher. More specifically, I can not go to most beer dinners, eat the food offered at beer and food pairing events, or cook many dishes said to pair well with beer. So after hosting a few pairing events at my NYC apartment over the years I decided it was time to put together a beer dinner at an actual restaurant. So I contacted my cousin Seth Warshaw, owner and chef at Et al Trattoria (Millburn, NJ) and Dennis Flynn, tristate sales representative for Stone Brewing Company to plan a four course kosher beer dinner. Once Seth put together the menu I emailed it to Dr Bill Sysak, Beverage Supervisor at Stone’s World Bistro and Gardens (Escondido, CA) to get suggestions for which Stone Brewing Co. beer to pair with each course. Upon receiving his suggestions I forwarded them to Dennis who then picked up and dropped off the beers before the January 10th event. On the day of the event 20 beer geeks gathered at Et al Trattoria to take part in the beer dinner. 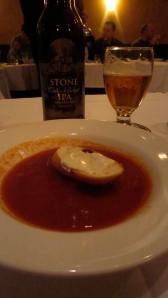 One beer and food pairing rule of thumb that I’ve found to be quite true is “when in doubt go Belgian”. So for this pairing I knew the beer’s belgian yeast character would play a big role in interacting with the flavors present in the dish. For me the spicy and earthy notes complimented the bronzini fish and tomato acidity in the soup quite nicely and kept me going back and forth between the soup and beer. I then paired the garlic bread crustini that was topped with the bronzini horseradish mousse and was again excited by how well it paired with this Belgian IPA. The earthy and spicy qualities of the yeast and the floral hop bitterness intensified and complemented the spiciness of the horseradish mousse while the garlic bread balanced the pairing. This was my first time pairing soup with craft beer and I am definitely looking forward to putting together my own soup and beer pairings.

To me this pairing had three components stemming from the layered complexity of the beer. Those components are the oak, hops, and malts. The lamb bacon went well with the sweet caramel malt backbone with the abv (7.2%) and bitterness cutting through the fat. Next, the sweet oak flavor accentuated the tart sweetness of the the beef carpaccio’s balsamic reduction marinade. Lastly, the floral and citrusy hop character helped the pear stand out amongst the meat and egg components of the dish. Overall, this was a good tasting pairing, but was my least favorite of the dinner.

As the waiters were bringing out this entree dish everyone’s first reaction was “wow those lamb shanks are huge!” To me that meant lots of meat to eat while figuring out the intricacies of this great pairing. As a smoked porter the beer was basically brewed to be paired with meat. In relation to this pairing the smoked malts intensified the strong flavors of the bits of lamb sausage that were mixed in with the cannelini beans. After enjoying the lamb sausage I dug into my lamb shank and reveled for a minute in how tender and rich it was. The sweet and roasty malts accented the savory lamb flavors that coated my palate with eat bite. Bringing things together…the rosemary and other herbs used in this dish complemented the roasted malts and added a brightness at mid-palate. With three pairings down, this pairing was leading the pack as my favorite pairing…that is until dessert was served…

Before tasting this pairing I knew it would be good, but was blown away by just how delicious it ended up being. Having not tried a candied jalapeno before I used my fork to pick up the jalapeno, a bit of the chocolate mousse, and a piece of the shortbread. Upon taking a sip of the beer, the pepper heat was just enough to make for a nice contrast to the sweetness of the other dessert components and the beer. After that contrasting pairing it was complementary flavors all the way. The shortbread was cooked just enough to leave its center sweet and a bit doughy, which complemented the milk chocolate and cocoa flavors of the beer. Especially when I got some of the melted chocolate mousse on my fork. Being that the beer had some age on it (released in the Spring) it’s sweetness was mellow and balanced which helped me eat the pairing slower and prevented the flavors of the dish from being overwhelmed by the beer and visa versa.

After the dinner my brothers and I discussed our impressions of the dinner with Dennis (tristate Stone representative) and took a few pictures with him. We all agreed that Stone’s first ever kosher beer dinner was a success and that all in attendance enjoyed the food, the beers (20 people meant there was plenty to go around), and learning about the potential of beer and food pairings. I definitely look forward to teaming up with other craft breweries to put together similar pairing dinners.